Are you ready to communicate with an assistant robot instead of a receptionist? Do you think you know, how to talk to a robot? Would you feel embarrassed or intimidated having such a conversation? Do you think it would be fun? In the past couple of weeks, hundreds of Original Sokos Hotel Presidentti guests were able to test their own behaviors in front of a service robot. This pilot was the final result of Laurea’s student project.

Pepper is about 120 cm tall, white and smooth with big eyes and a shy smile. It is designed to communicate with people. Its main function is to entertain and inform customers. Pepper can talk multiple languages, give you a hug, perform dance moves and pose for pictures.

The aim of the project was to test the possibility of using an assistant robot in a hotel. In the past years, service robots have made several appearances in public venues and have also raised interest in hospitality management.

“We still have very limited insights on service robots in hospitality management. As far as I know, this was the first time a social service robot was used in a hotel in the Nordic countries”, says Jaakko Porokuokka, Laurea’s senior lecturer and the project coordinator.

The idea was to use the robot to provide entertainment, information, and guidance to the hotel’s guests. It was not about replacing humans working at the reception desk, but rather to add new experience. The research team tested new possibilities, new services, and people’s behavior. In the foreseeable future, there will be more and more robots around us providing services, hence we need to know more about human-robot interaction. 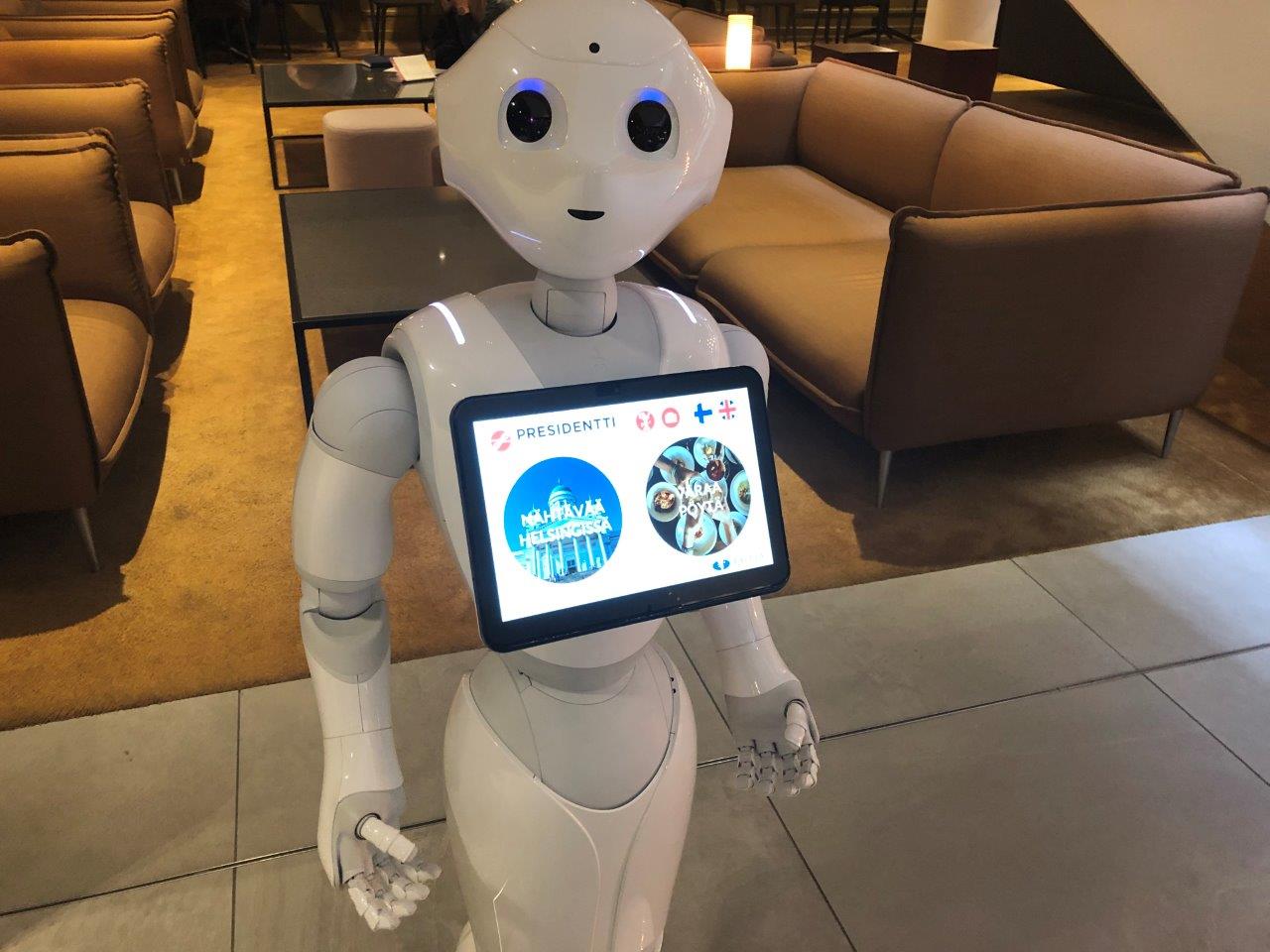 Laurea’s masters degree student in service design Markus Alavaikko took lead in designing the custom-built application for Sokos Hotels. Pepper has three main functions: it can communicate with customers by answering questions regarding the hotel’s services and facilities; it can tell guests about interesting sights in and around Helsinki; it can also make reservations for nearby restaurants.

Although the main idea of interacting with the robot is having a conversation, Pepper has a built-in tablet, so one can type a question. The tablet might help in situations when the robot doesn’t recognize what someone asks.

The pilot project in Original Sokos Presidentti hotel was a success. People approached the robot, they were neither intimidated nor too shy. Depending on time of day, there were between 40 and 100 guests approaching Pepper. Children were especially fascinated by the humanoid robot. They showed their curiosity by trying out its functions.

“They seemed to have fun with it”, said Linh Hahkio, Laurea’s student in Business IT responsible for the project’s software development.

People’s first reaction to Pepper was to say “hi” and next “what can you do”.

“People seemed to be really curious about the technology, what is the robot capable of. And they loved the entertainment part: dancing and posing for pictures”, said Jukka Kaartinen, development manager at Sokos Hotels.

Chatting with a robot difficult at first

Still, the research team faced some challenges. One of them was speech recognition.

“Sometimes it was difficult for the robot to recognize what people asked, because of the ambient noise around or different accents or dialects. Another thing is, that you can ask the same question in many different ways. We had to program the robot for all those possibilities, we had to write a lot of scripts”, said Linh.

She added, that sometimes people asked for something that was not implemented in the application, so the robot didn’t know the answer. Some customers started talking before the robot started listening and therefore couldn’t answer the question.

“Because people usually simply don’t know how to talk to a robot, how to ask a question, we made the robot proactive. We let Pepper lead the conversation and ask additional questions. It helps to interact with the robot”, added Porokuokka.

“It is extremely fun to work with Pepper; there are always new things you can try out. We modified how the robot dances, we made different animations, we added various songs and movements”, said Linh.

She sees a bright future for service and hospitality robots. Right now the robot has just a few functions, but the more it can do for the customers, the more useful it becomes.

“Using a prototype, in this case quite refined and functional one, allows us to collect valuable insight from live audience. Bringing an unfinished product right in front of the customers may seem a bit odd but involving the customers early on in a project with a prototype saves money later on as we get to develop the things that bring true value to the customer in this particular scene. Not to mention the fact that the staff gets to see the value Pepper brings, not taking away their jobs anytime soon”, said Alavaikko.

This project was about studying people’s interactions with a service robot in the hotel industry.

“We have learned a lot about people’s reactions, willingness to interact and their interest about the technology. To our surprise even the Japanese were as much excited as all the other guests and wanted to try out what the Finnish Pepper can do”, said Kaartinen.

This is a joint-venture project between Laurea UAS and Original Sokos Presidentti hotel in Helsinki. It was funded by Sokos Hotels. The chain is interested in continuing the collaboration and introducing robots in their hotels.

Career monitoring survey for UAS graduates to be launched