Nursing degree students had the opportunity to practise typical home care situations and acquaint themselves with well-being technology in an exercise inspired by escape room games.

The goal of the project, carried out together with Laurea’s Technology Library, was to introduce students to well-being technology through an interesting, functional game. The game was part of the Vulnerable groups and service integration course, where students gain insight into the needs of patients in different stages of life and with different cultural backgrounds.

The idea for the game came from Anniina Honkanen, Project Officer at Technology Library.

“I could, of course, have stood at the front of the classroom and presented these technological solutions to the students,” says Honkonen, gesturing towards the smart dispensers, locks and other instruments.
“However, we wanted to do something different, something more engaging, this time.” In the game, students practised using the devices in a realistic customer situation.

The idea for the game came from the widely popular escape room games, where participants have to complete a set of tasks before the time runs out in order to get out of the locked room. This time, the students were not locked anywhere, but in order to achieve a pass for their performance, they had to perform the measures essential to the patient’s care and figure out, for example, how to open a door equipped with a smart lock.

The students had no advance information about the programme, but seemed to look forward to the event. The rules of the game were quite simple: first-year nursing students had drawn up an imaginary customer case and a script explaining how the game was to progress. The participants formed teams, which took turns being the players, actors or judges. The judges assessed the players’ performance and gave points for the players’ adherence to the script. The players were not familiar with the script, but instead had to use what they had learned in their studies and independently decide how to act.

The game situations mirrored the real world. Among other things, the students had to deal with a situation where a disoriented elderly person had collapsed on the floor, complaining of chest pain and unable to recall whether he had taken his medicine. Points were awarded, among other things, for correctly administering first aid, calling an ambulance and calming down a worried family member.

The participants were second-year students. To an outsider, the students seemed to handle the imaginary customer situations professionally, even though many of them were not yet familiar with home care tasks. The functional morning activities also required the participants to play their part, which was not a problem: all of them quickly assumed their roles as home care workers, patients collapsing on the floor and hysterical family members.

Milla Ylitalo, Senior Lecturer in nursing, was impressed by the students’ performance.

“This is a really active group that is always ready to try new things. They have the courage to throw themselves into activities, without clowning around. They behave very professionally and know a lot about the topics. I am continuously bombarded with terribly difficult questions,” says Ylitalo, laughing.

The students found the game to be a good way to learn and hope to see more exercises of this kind in the future.

“This concept has great potential for development. In addition, students can help develop the game by creating customer situations and writing scripts, as well as play and control the game in versatile, multidisciplinary ways. The concept would probably work for students in other fields as well,” Honkonen adds. 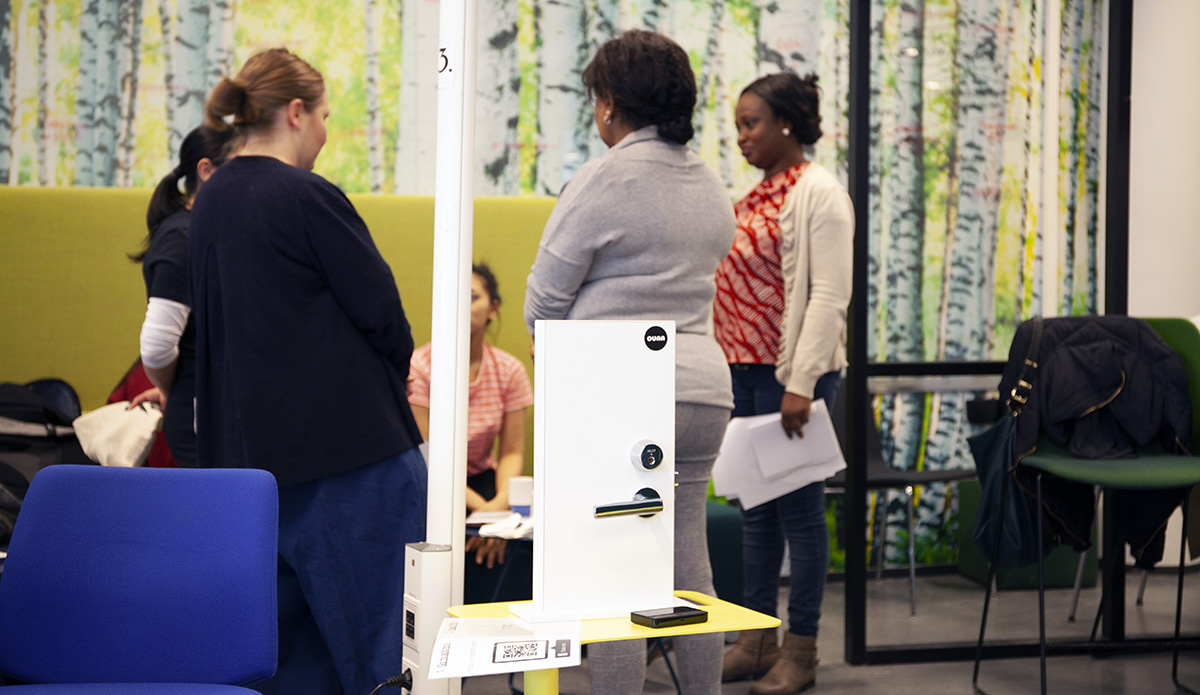 In the foreground, a miniature door equipped with a smart lock, which can be opened using a smartphone. This relatively new solution is used especially in home care.

Students come up with new motivating e-learning solutions for Unilever

Service Design Sprint highlighted the longing for a sense of community